skip to main | skip to sidebar

Jewish communities exist all over Africa in Mali, Nigeria, Congo, Cameroon, Ghana, Ethiopia, Zimbabwe and South Africa. Jews from Cameroon are said to originate from Egypt. In order to escape the Islamic conquest of North Africa they were pushed towards the Equator and settled in Central West Africa 1,200 years ago. The largest Israelite tribe in Cameroon is the Bassa people of Douala in the Littoral province. Most of the early migrants had built synagogues but there are no records of existing ones in Cameroon today. King Alexander Bell who ruled the Douala region of Cameroon in the late 19century was a practicing Jew. His family is said to have originated from Israel and migrated to Egypt and then Cameroon. His children are said to have been going to shul, putting a yarmulke on. By blood, they have been Cameroonian Jews for many generations. The dynasty of King Manga Bell has survived till date. The kings are crowned in ceremonies that look Jewish. The Cameroonian born Rabbi Yisrael Oriel’s grandfather is said to have built a synagogue, now in ruins, of which his uncle had been the last gabbai. According to Rabbi Yisrael, in 1920 there were 400,000 'Israelites' in Cameroon. But by 1962 the number had decreased to 167,000 due to conversion from Christian and Islamic missionaries.
Other Jewish tribes in Cameroon are said to include Haussa, descended from the tribe of Issachar, who were forced to convert to Islam in the eighth and ninth centuries, and the Bamileke who are largely Christian.
Posted by Nchinda Gideon at 6:48 PM

Hello. This post is likeable, and your blog is very interesting, congratulations :-). I will add in my blogroll =). If possible gives a last there on my blog, it is about the Celular, I hope you enjoy. The address is http://telefone-celular-brasil.blogspot.com. A hug. 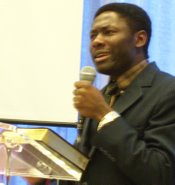 Nchinda Gideon
I was born in 1975 in Babungo-Ndop, North West Province of Cameroon. I am married to Mbiwonwi Eleanor and currently enrolled in the Master of Evangelical Theology program at Tyndale Theological Seminary in The Netherlands. Email: ncgideon@gmail.com Phone: +31 642457081